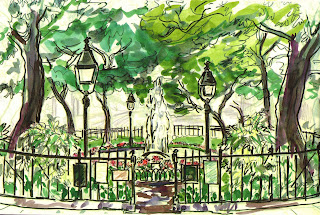 Hot summer days at Bowling Green Park.
The geraniums are always planted in the heat of the summer,
their bright red color and a beautiful contrast to the
green of the trees and plantings.
Posted by Illustrated Courtroom at 7:27 PM No comments: 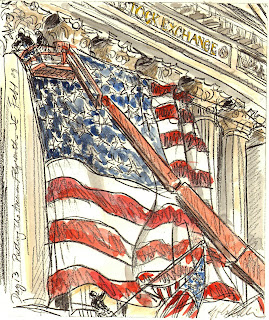 This was drawn back when the NYSE was adorned with the
American Flag after September 11th.  The flag was being re- mounted
after the holiday flag lights were taken down in January.
Thought it was a nice Independence Day image, especially since
lower Manhattan was where the earliest settlers lived and our
founding fathers walked the streets.

Posted by Illustrated Courtroom at 6:39 PM No comments:

Knee High by the 4th of July~ The Battery Urban Garden

I grew up in upstate NY and my mother was from a rural part of Nebraska. A well known saying by the farmers I knew, was that the fields of corn were " knee high by the 4th of July".  If that was the case there would be a good crop.
Not that I noticed any corn stalks at the Urban Garden, though there may be some now, this is a place
where rural meets city in Manhattan.
Happy 4th of July!

Posted by Illustrated Courtroom at 10:53 AM No comments:

JULY 1st ~ New Day for Community Board One 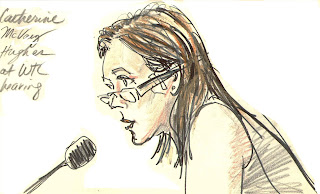 The local Community Board One has a new administration and their terms start today. All new folks who I am sure will do a great job for the community: Catherine Hughes Chairperson, Anthony Notaro Vice Chairperson, John Fratta Treasurer, Adam Malitz Secretary, and Dennis Gault Asst Secretary.
Pictured above is Catherine Hughes, who chaired the WTC Committee and advocated for the community on many issues, including the Zadroga Bill, which included hundreds of visits to Washington DC to lobby on behalf of the community.
youtube link on Zadroga Bill
http://www.youtube.com/watch?v=xDafPMvzr4I 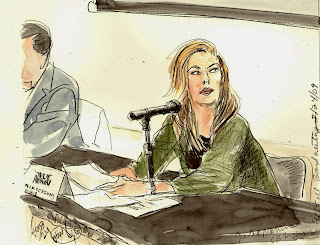 This image above is of the former Community Board Chair Julie Menin. It was drawn during a meeting where the fate of the Fulton Street Transit Center was unclear in 2009. Now it is on schedule to be completed by 2014.
story link
http://www.lowermanhattan.info/future/looking_ahead/transportation/fulton_street.aspx
Posted by Illustrated Courtroom at 10:13 AM No comments: