Posted by Illustrated Courtroom at 5:28 PM No comments:

Brother Joscephus and the Love Revolution at the Seaport

Since 2007 Brother Joscephus and the Love Revival Revolution Orchestra
has been on a musical mission to make the world a more righteous place.
The two main visionaries of this 12-piece explosion of love -
Brother Joscephus and his eccentric cohort,the Right Reverend Dean Dawg -
dip heavily into a gumbo rich with the powerful rhythms of New Orleans,
old school funk and soul, classic rock and a healthy dose of feel-good gospel music.


When you combine the music and the message with a one-of-a-kind, high-energy stage spectacle, you got yourself one hell of a revolution on your hands.
From their home base in Brooklyn, New York, Love Revivals have taken place all over the nation, from New Orleans to Burlington, Vermont and Los Angeles to the Hamptons. The band’s legendary self-titled debut CD was released to rave reviews and accolades (“I Won’t Be That Man” and “A Child Shall Lead” were both selected as finalist in the prestigious John Lennon Songwriting Competition). “Live at Brooklyn Bowl” followed in May, 2011 and won the Independent Music Award for Best Live Performance, 2011. “Revolution of Love,” released in 2013, takes their signature Epic Gospel Rock to another level. Blending elements of funk and soul with 70’s prog-rock sensibilities this groundbreaking, love-infused concept album defines the Secular Gospel movement.
Posted by Illustrated Courtroom at 6:49 PM No comments:

This mural above was designed by the great David Zaus
in concert with his wife the late Donna Downes,
utilizing artwork by Elizabeth Williams.
It highlights the attributes of Lower Manhattan,
with a bit of patriotic spirit.
Happy July 4th and
enjoy our wonderful downtown neighborhood.
Has so much to offer.

Note: click on the image to see it larger
Posted by Illustrated Courtroom at 9:57 AM No comments:

To all  mothers: you have spent hours at playgrounds ( and fountains:) early mornings, getting kids to school, sports, activities, and doing just about anything, that needs to be done,
Happy Mothers Day.
Wishing you a wonderful day:) 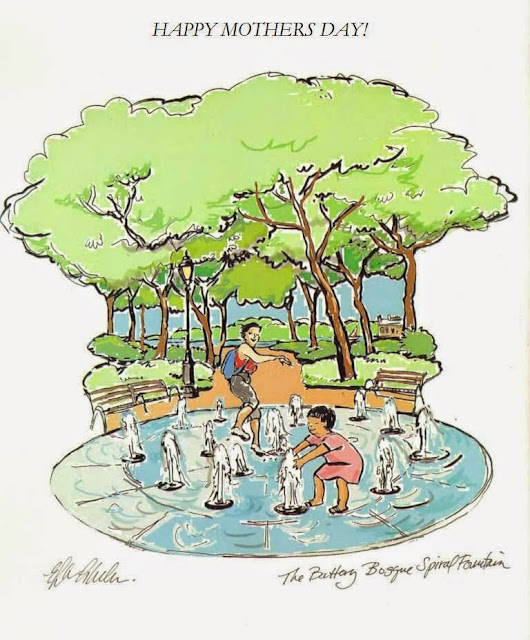 And thank you Warrie Price and the Battery Park Conservancy for the wonderful fountain,
for playing and admiring.
Posted by Illustrated Courtroom at 7:40 AM No comments:

At last night's 1st Precinct Community Council meeting, Captain Brendan Timoney (pictured)
spoke about the dangers of texting and walking.
Indeed TD2 Officer Jimmy Rudolph spoke about a woman who was run over in the subway( miraculously not killed) who was texing and walking, and fell on to the subway tracks and run over by a train.
From the NY Post story:
Dye had been texting in the Broadway-Lafayette Station in Soho at about 10 a.m. Thursday when she slipped on the wet platform and fell onto the tracks — just as a southbound B train was rolling into the station.
Workers cut power to the track and freed Dye, who was under the train but not hit by its wheels.
The 25-year-old South Carolina native, who now lives in Bed-Stuy, had been scheduled to perform Friday night at a Valentine’s Day show at The Stand in Gramercy Park.

So Please don't Drink and Drive
and
Don't Text and Walk
for more info on the 1st Precinct Community Council see the website
www.1stprecinctcc.org

Our next meeting is March 27th.6:30pm at the 1st Precinct

Posted by Illustrated Courtroom at 11:30 AM No comments:


Jessica Lappin, former council member who ran for Manhattan Boro President, has been
appointed to be the new president of the Alliance for Downtown New York. The Downtown
Alliance is the largest BID( business improvement district) in the country.
During her campaign Lappin made a point of understanding the important issues downtown
she had a command of the issues including: land use, planning, parks and
infrastructure.  She was also the only public school parent in the boro president race.

"The transformation unfolding in Lower Manhattan is inspiring,” Lappin said in the statement. “Few places anywhere can boast of the constellation of game-changing projects underway and nearing fruition. Lower Manhattan is an extraordinary place. Working on behalf of the area’s businesses, residents, workers and visitors will be an honor and a privilege. "

Jessica Lappin will be a big asset to the downtown community.
See the Downtown Post for news article:   Downtown Post NYC archive
Posted by Illustrated Courtroom at 4:10 PM No comments:

Congrats Terese Loeb for creating!
Posted by Illustrated Courtroom at 3:25 PM No comments: