Gus, the Central Park Zoo Polar Bear, Is Dead - Lenox Hill - DNAinfo.com New York
Normally I do not post things about "uptown" news on this blog but due to today's news that Gus, the beloved Polar Bear from the Central Park Zoo died, I made an exception.
25 years ago I was hired by the New York Times to do a series of drawings about New York City for the Metropolitan Diary section. During the assignment I wandered about the city looking for key scenes; scenes that were quintessentially New York, and Gus the Polar Bear fit that bill.
Here he is sunning himself on the rocks at the Central Park Zoo.  I spent several days at the zoo and the bear always had a crowd of fans, pointing, photographing, oohing and aahing over him. He was quite the popular bear,
it is sad to see him go. 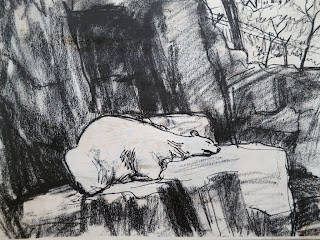 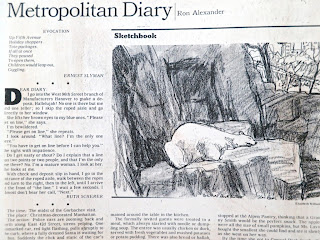 Posted by Illustrated Courtroom at 8:30 AM